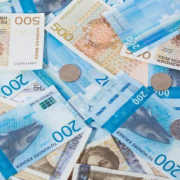 What is the Norwegian krone (NOK)? – Definition for beginners

The Norwegian krone (NOK) is the official currency of Norway and is regulated and administered by Norges Bank, Norway’s central bank. The bank has issued a total of eight series, including in October 2018, the currency bills with units of SEK 50 and SEK 500. Consumers can continue to use the previous SEK 50 and 500 sets through October 18, 2019.

Norwegian Kroner, in plural terms, is divided into 100 øre. The word krone is translated from the English word “crown.”

The front side of the paper notes have images of famous Norwegians as well-known researchers and artists and information showing a particular individual’s contribution to Norwegian culture. On the back of each paper note is a piece of Norwegian art. For example, 50 krone notes have shades of green, a portrait of Peter Kristen Asbjørnsen, an artist’s performance of Asbjørnsen’s story “Summer Nights in Krogskogen.”

The basics of the Norwegian currency

The Norwegian krone is Norway’s main currency and is regulated by the Norwegian central bank, Norges Bank. “Krone” is a Norwegian term meaning “crown” in English. The krone is divided into 100 ores that have been used electronically since 2012.

Norwegians pay in cash using coins and banknotes. Coins are available in different denominations, such as 1, 5, 10, and 20. Banknotes of 50, 100, 200, 500, and 1000 are in circulation. The banknotes contain pictures of prominent Norwegians who have influenced the country’s history.

Prominent Norwegians include researchers and artists, and the notes inform their contributions to the country’s culture. In the foreign exchange market, the Norwegian krone uses the NOK code. The Norwegian krone is Norway’s most important currency, used by citizens to pay for goods and services.

The first circulation of the crown occurred in 1875 when it replaced the speciedaler. The exchange rate at that time was 4 krone per speciedaler. After the transition, Norway joined the Scandinavian Monetary Union, an alliance that lasted until the outbreak of World War I. During the union’s existence, the Norwegian krone served as the gold standard, using 1 kilo of gold equivalent to 2,480 Krones. The use of the Norwegian Kroner as the gold standard ceased in 1931.

Until 1875, the Norwegian speciedaler was Norway’s business currency. When Norway joined the Scandinavian Monetary Union in 1875, the currency was downgraded in favor of the krone. Other members include Denmark and Sweden.

When the monetary union was dismantled during World War I in 1914, member countries retained their currency names. The krone was used as the gold standard of the Scandinavian Monetary Union, and 1 kg of gold is equivalent to SEK 2,490. The standard ended in 1931, but Norway maintained its federal gold reserves.

During the German occupation, which lasted until 1945, one krone was equivalent to the national reichsmark of 0.6. After the war, the krone was pegged to the British pound at a rate of 20 pounds to 1 pound. In 1992, the Norwegian Central Bank abandoned the fixed exchange rate and adopted a floating exchange rate due to increased speculation on Norwegian Krones in the early 1990s. The decision was triggered by an interest rate hike on the Kroner, which caused Norges Bank to lose around SEK 2 billion. The Norwegian Central Bank still fluctuates its exchange rates.

Economic impact on the value of the Norwegian krone

Norway’s shipping, hydro, fisheries, and industry contribute to the gross domestic product (GDP). However, it is interesting that many industries are state-owned enterprises. Historically, the krone has been a wise investment as Norway claims to be one of the most stable economies in Europe.

Norway is one of the wealthiest countries in the world, with the highest standard of living. According to World Bank data for 2017, Norway has a very lucrative economy with a slow population growth rate of 0.9% per year. The gross domestic product (GDP) annual growth rate is 1.9%, and the inflation deflator is 3.8% per year.

Krone is used throughout Norway as the main currency to pay for goods and services. Payments are also accepted in neighboring countries bordering Norway, such as Sweden and Finland.

The Norwegian currency is also used in Denmark’s famous ferry ports, Hirtshals and Frederikshavn. Cross-border shopping is a common practice among Norwegians buying food, alcohol, and tobacco in bulk at the border. Buying these products domestically is a way to save on taxes and high fees.

Norwegians and tourists visiting Norway can get their bills at ATMs, commonly known as small banks scattered across the country. Debit and credit cards are accepted in almost every store and restaurant and can be used for payment in lieu of cash.

For convenience, some stores may require customers to use a Norwegian debit card instead of an international one. In addition, customers can use the mobile payment app to pay at dozens of convenience stores across the country.

FAQ – The most asked questions about Norwegian currency :

What is the value of the Norwegian currency?

The current value of one Norwegian krone is $0.10.

Is the Norwegian currency safe to trade?

In general, the Norwegian krone is safe to trade. The currency’s value cannot be influenced by let-downs in other markets. The currency is improbable to witness any sharp changes in value, as the Norwegian economy is comparatively stable.

Is investing in the Norwegian currency profitable?

Even though the Norwegian krone is usually considered a reliable and safe currency to trade, its profit or loss counts on the decision of the investors. It means that it is the individual discretion of the trader whether to put in the money to buy the currency.

Is the name krone used in other countries for their official currencies?

Is it wise to invest in the Norwegian krone?

The Norwegian krone does have a reputation for being a solid currency because Norway has little or no debts. The Norwegian krone is also a self-governing currency, so its viability is unaffected by the achievements or failures of any other country.

How to buy Chinese Yuan